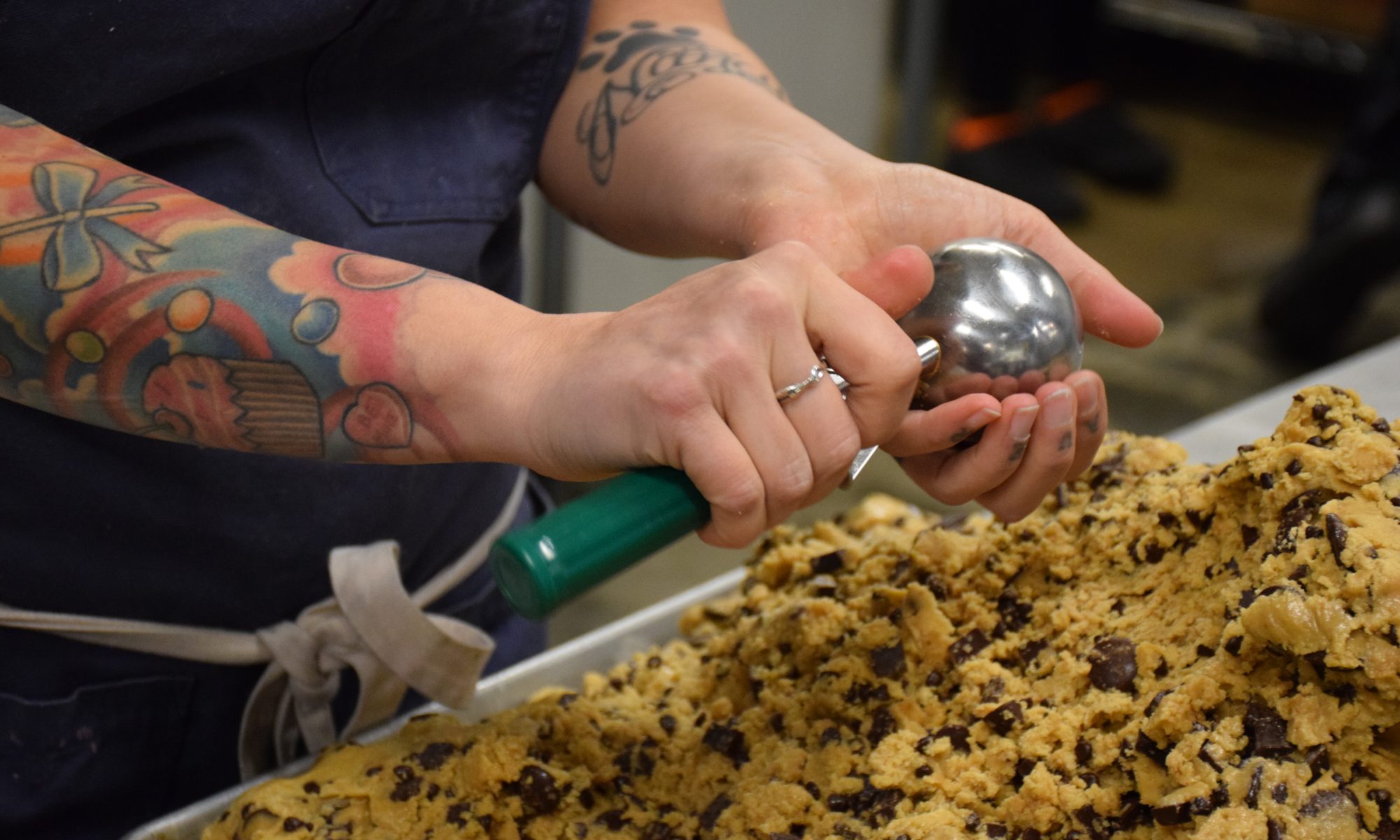 Rocio Fleckenstein first felt the joy of the being in the kitchen as a child while celebrating her favorite holiday — Thanksgiving.

“I felt warm and a togetherness with people,” she recalled. “I really love Thanksgiving because it’s a way for people to come together and connect and just have a meal and be merry and drink and eat and have a good time.”

Fleckenstein took those early, feel-good experiences of being in the kitchen with her family and catapulted it into a career.

Now, at age 30, she leads the kitchen as the executive chef of the newly-opened Kairoa Brewing Company in the University Heights neighborhood of San Diego.

Her journey in the culinary world led Fleckenstein to work in a cheese shop as a teenager, to a brief stint as a student at the Culinary Institute of America at Hyde Park and through kitchens in Orange County, Spain and San Diego.

Despite her many accomplishments as a chef, her experience is shaped and affected by a sense that the food and beverage industry is still a very male-driven field of work. Fleckenstein said she even sees this in the way her staff addresses her. 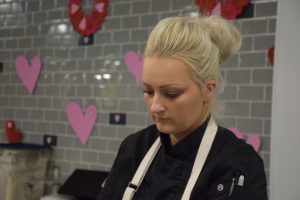 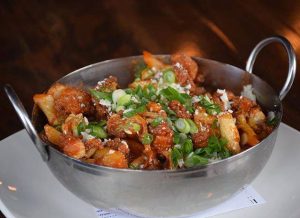 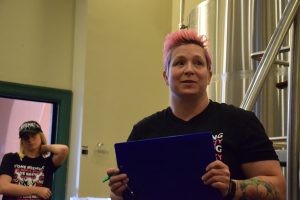 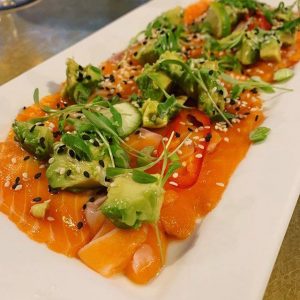 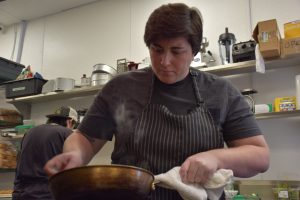 Gender imbalance remains an issue in the workplace

The lack of women in leadership roles can have a strong effect on how co-workers, especially those working under female chefs, are treated during and after work.

“On a Friday night anywhere, all the boys are going to mingle and come together and then you’re like, ‘I’m the only girl here,’” said Audrianna Nava, a craft cocktail bartender at Polite Provisions in Normal Heights.

“It makes you create a thicker skin because boys joke around different than with each other than they would (with women).”

Women who work in the culinary field say they don’t want to be seen as “special” or “unique,” they simply want to be treated as equals to their male counterparts.

However, almost all of the eight female food and beverage professionals interviewed for this story expressed a feeling that they needed to push themselves harder than the men they work with to gain the same respect.

“You have to be as good or better — and actually better — for them to respect you in any capacity and for them to take you seriously,” Fleckenstein said. “It’s either you’re getting hit on or they just treat you like a piece of ass.”

Some even said they work when they aren’t feeling well because they don’t want to be looked down upon if they call out sick.

“I feel like there have been a lot of times in my career where I get sick or something happens, I have had to push through and be strong and just like make it happen,” said Kat Johnson, executive chef of Luce Bar & Kitchen in Bay Park.

“If I call out some of the people that I work with will be like, ‘Oh, she’s a chick. She just can’t hang. She’s just too weak.’”

Despite a large number of women who own restaurants or work in kitchens and craft cocktail bars, a gender imbalance exists when it comes to leadership in San Diego’s food and beverage industry.

By creating an original database of food and beverage restaurants in the county of San Diego, this reporter found that more than 71% of management positions are held by men in the 109 restaurants included in the list.

The database is a listing of restaurant owners, executive chefs, beverage directors, head bartenders and those who hold other executive positions in the food and beverage industry.

The data was found by looking at the business websites, profile stories and other articles for restaurants, culinary groups, catering companies and bars throughout San Diego County.  The list includes 220 unique people in 250 positions in the county — some employees work at multiple businesses.

Nationally, more than 78% of chefs and head cooks are male, according to the 2017 U.S. Census American Community Survey.

The survey also found that men continue to earn more money compared to their female counterparts. For every dollar a man makes as a chef or head cook, women only make 75 cents.

Similar trends are echoed throughout the food and beverage industry.

While women make up 55.4% of the bartending workforce nationally, they earn $6,000 less each year on average. Men account for only about 15% of host positions across the country, yet make about $3,000 more per year, according to U.S. Census data.

#MeToo movement extends to the kitchen

Food writer Michele Parente has noticed the gender imbalance in her reporting on the local food scene for the San Diego Union-Tribune.

One prominent local restaurant group recently contacted her to promote the number of women at the company to gain newspaper coverage. Upon looking at their website, Parente found that none of the people who worked in management positions were female.

“All of the top guys — all of them — are men in the top positions and their PR person pitched a story about how many women there are in ‘really unique, great positions’ at this restaurant group,” Parente said. “My expectation is that there should be women. Why are you proud of the fact that you’re employing women in your restaurants?”

The #MeToo Movement and annual women’s marches of recent years have brought the issues of gender equality, LGBTQ+ rights and female empowerment as leaders into the spotlight.

Parente said this public relations pitch may have been an attempt to capitalize on the ongoing, national conversation related to  such issues.

“I actually think that that was a very cynical thing for them to do,” Parente said. “I think they were trying to take advantage of this conversation that people are having about women right now.”

Laura Ulrich, a small batch brewer for Stone Brewing Co., said one of the last remaining barriers for women going into the brewing is obtaining the knowledge of the craft beer industry.

Ulrich is the current president of the Pink Boot Society, a non-profit organization that supports education for women working in the brewing industry. Members support female brewers through scholarships and beer collaboration projects to teach various skills.

“ There’s no glass ceiling in beer because it really isn’t — we can do anything — but there’s an educational component, ” she said. “If education is what’s stopping women from advancing and becoming master brewers or becoming CEO, then why not help them and offer them scholarships? ”

Yet, there are some outliers to the disproportionate ratio of men to women in restaurant leadership teams.

“In terms of sheer number and critical mass, that doesn’t exist yet,” Parente said. “However, I do think that there is a very positive development in that some of the biggest restaurateurs, the women who own businesses and own super successful families and groups of restaurants, a bunch of them are women.”

At The Wild Thyme Company — a restaurant and catering company in San Diego — only five people out of the 18-person team listed on their website are men.

Female chefs are also breaking the glass ceiling in other ways, like Dominique Crenn, executive chef of the three Michelin star-rated Atelier Crenn in San Francisco.

“With Dominique Crenn being so high up and being recognized as a female in a Michelin world where it’s just a men’s club, all these barriers have been broken now and so the acceptance is a little bit easier,” said Lori Sauer, executive pastry chef for Blue Bridge Hospitality.

Some women, like local celebrity Chef Claudette Zepeda-Wilkins, use their platform in the restaurant industry to make small but significant strides toward gender equality.

“She’s really fearless about going after what she wants and she’s doing something that nobody else in San Diego is doing: putting really regional Mexican food of high quality in a fine dining setting,” Parente said.

Zepeda-Wilkins, who owns El Jardin in Liberty Station, gained international notoriety by competing on Top Chef Mexico. She makes a point of hiring women and incorporating the female perspective into aspects of her restaurant.

“Half her kitchen staff is female and she was very conscious about doing that,” Parente said. “She didn’t want to be a woman running a kitchen full of men. She wanted to have gender equity in her kitchen.”

With the late night hours of working in a restaurant, the culinary industry can be a difficult career for parents to maintain a work-life balance, regardless of gender. Of the eight women interviewed for this story, only two had children.

Women tend to be the primary caregivers for children in the United States. In 2016, Pew Research Center found that 27% of mothers identified as stay-at-home parents, compared to only 7% of fathers.

Franco on Fifth owner and Chef Flor Franco spent much of her career as a single mom working two jobs while raising her children.

“Pretty hard years, but really beautiful,” Franco said. “When you’re raising amazing kids, somehow you develop a sense of responsibility that is really hard to get when you’re on your own, for most people.

“Knowing that my kids needed school clothes and food everyday made me very strong.”

This leads some restaurant professionals to migrate toward other sectors of the industry.

“There’s plenty of chefs, mostly men, that I know that stopped working in a kitchen and started becoming food reps,” Rocio Fleckenstein said. “It allows them to work from home Monday through Friday and be there for the children — and they put their careers and passions on the back burner to raise the kid.”

One of the long-standing stereotypes about women in the culinary field is that they gravitate toward the pastry side of the kitchen.

While Parente said it’s a myth that women prefer pastry careers, they might enjoy  making desserts because of the earlier shifts.

“Pastry shift is very female-friendly — it’s very family friendly,” Parente said. “If you have a kid, you can go to work in the morning and you can come home at a decent hour, whereas if you’re in the kitchen during dinner service, God knows what time you’re going to get home.”

While she plans to have children in the future, Fleckenstein wants to find a way to continue working as a chef with her family. She strives to someday have her mother and sister move from Spain to America so they can own and operate a restaurant together.

“It has been a dream of all three of ours my whole life, so I really want to get to the point where I can make that happen,” Fleckenstein said.

Fleckenstein hopes her children will grow up in the family-owned restaurant and learn to appreciate the kitchen life as she did.

“When I do have my own business, I want to have my kid grow up in the business, be around the restaurant and have that fun environment to to grow up in,” she said. “I just want to make sure that I live the simple life and I’m happy and my family’s happy and then I’m raising my child well.”

All photos, graphics and videos by Lauren J. Mapp

Video Playlist: Watch all the videos in the Culinary Women series on YouTube: